A treasure of health and force. Its value has been appreciated ever since the antiquity:

In the Egyptian papyri, 3500 years ago, honey is mentioned as a therapeutic means.

In the Hindu Book of Life, it is stated that life lasts longer when the daily diet is based on milk and honey.

Nectar was the food of the immortal Olympian Gods. The Nymph Melissa raised Zeus feeding him with honey.

Hippocrates recommended honey for the cure of many diseases and so did Aristoteles who believed that honey elongates life.

The Egyptians offered honeycombs with honey to their gods as a precious gift of worship and devotion.

Why honey? Why not sugar?

There is a very large literature on honey, which celebrates this wonderful product of nature. Nothing negative has ever been written about honey.

On the contrary, sugar has been accused of a lot of side effects on humans: high cholesterol levels, headaches, fatigue, nervousness, constipation are all largely attributed to common sugar.

Sugar is an industrial product, the result of chemical procedure. Honey is a natural biological product that comes directly form nature and does not admit any treatment.

Sugar is composed of sucrose. Honey includes at least 180 various substances which are organically interconnected in a way that up to now, no one has not been able to produce artificially, although the composition is no secret.

The nutritional value of honey

The sugars of honey are simple, they are immediately absorbed and that is why honey is a quick source of energy for the body, for the athletes, the children, pregnant women, for every sick and feeble body. 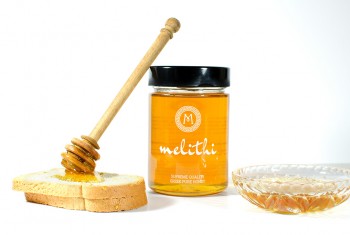 Honey has inorganic elements, known as trace elements, which play an important part in metabolism and nutrition. They are components of the bones and cells, participate in various enzyme systems and finally, they regulate the acidity in our stomach.

Honey has antiseptic properties, it is tonic, increases the pace of the heart regulation, reduces stomach ulcer problems and in general, it contributes in the proper function of the human body.

The concentration of vitamins helps in absorbing the sugars.

Consuming honey helps in the faster recuperation of health in cases of anemia, due to the Iron it contains.

Crystallization of honey and quality

Crystallization is a natural phenomenon that does not cause any change in the nutritional and biological property of honey. It happens because honey is a plant origin product and it is related to its chemical synthesis. The factors that affect the crystallization and its speed are: the concentration of glucose and water, the relation between fructose and glucose, the concentration of the sample in pollen, the presence of melixitole etc. A crystallized honey is not bad nor adulterated. Crystallized honey becomes fluid easily in a “Bain-Marie” pot without losing any of its biological and nutritional properties.

The color of honey

The color of honey indicates its origin. Dark colored honey varieties are rich in trace elements (Potassium, Magnesium, Phosphorus, Iron, Natrium etc) and are therefore of high nutritional value. The light colored ones are of great aroma and taste.

DID YOU KNOW THAT…

Honey is preserved in a cool, dark, dry and odorless environment. Crystallization is one if its natural properties and therefore it is not a sign of adulteration or bad quality.