The history of beekeeping

Beekeeping has a long-last tradition in Greece, going back to when Mythology met History.

The earliest person that appears to work as a beekeeper is Aristaios. He is one of the most doubtful personae of the ancient Greek popular religion and he definitely was the most important figure of the mythological circle of Kea.

As fruit of the union of Apollo with the Nymph Kyrene, Aristaios saw the first light in Africa, in the palaces of Libya. When he was born, Mercury gave him to Gaia and the Horae to raise him up. They dripped ambrosia and nectar on to the baby’s lips and thus, he became immortal. (This procedure towards immortality bears a stunning resemblance with the way a worker bee becomes queen: nutrition makes the difference!)

When Aristaios grew up, the Muses taught him Divination and Medicine. The Nymphs taught him the cultivation of the vine, the olive tree and beekeeping and this last one was what he saw distinguished for.

Kea is considered to be the first place he visited. He taught beekeeping to the inhabitants of Kea. Aristaios was therefore the inventor of a series of useful arts for the people and namely the Kea islanders. Beekeeping was the most important among these arts. Aristaios and the bee will become the symbols of the island and will be represented on the coins of Toulida, Karthea and Koressia.

The legend of Aristaios testifies the existence of extensive beekeeping in the ancient times. There are many more proofs of that as we approach the historic times.

During the excavations in Phaistos, Crete, the archeologists stumbled upon clay hives of the Minoan era (3400BC), which is a lot earlier than the Homeric times. The golden jewelry represent 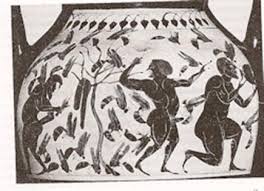 ing a complex of two bees holding a honeycomb and coming out of the hive dates back in the same age and so does another golden jewelry in the shape of a bee, which was found in the Knossos excavations.

There was also a clay sign with the inscription: «Πάσι Θεοίς Μέλι: ΑΜΦΟΡΕΥΣ 1» which means: «Offer honey to all the gods: an amphora». The phrase is written in the syllabic alphabet of Linear B’ in the 14th century BC and was translated by the British architect Michael Ventris in 1952.

In Odyssey, (verse Κ-519) “Melikraton” is mentioned as a mixture of honey and milk that was drunk as an exquisite beverage; it is also stated (verse, Υ-168) that the orphan daughters of Pindarus were raised on cheese, honey and wine by the goddess Venus herself. This same food was used by Circa, the witch, in order to seduce Ulysses’ comrades. (verse, Κ-213).

Hesiod mentions the Simvlous” which is the name given to the bee-hives of those times. Although this sort of beehives is not thoroughly known, it is certain that they were constructed by people who bred them in order to collect the honey.

Aristoteles’ essays on beekeeping (322 BC)) were a bee-keeping milestone not only for the ancient Greeks but also for all the civilized nations of the ancient world.

The existence of beehive “enterprises” is testified during the pre-Aristotelian period, when bee-keeping had already been heavily systematized.

The great Athenian legislator, Solon (640-558 BC) adopted several legislative measures for bee-keeping. One of these measures that prove the existence of bee-keeping companies and regulate the distance between beehives is the following : «Μελισσών σμήνη καθιστάμενα απέχειν των υφ’ ετέρου πρότερον ιδρυμένων πόδας τριακοσίους» (New beehives should be located at 300 feet distance from those already established) [Plutarch: Solon’s life].

Hippocrates, the Father of Medicine (462-352 BC) recommended honey to all people and especially the ill.

Democritus, when asked how it is possible for people to live longer and healthier, answered:  «Ει τα μεν έξωθεν ελαίω του σώματος τα δε ένδοθεν μέλιτι χρίσοιντο». (They should use oil for external purpose and honey for internal purpose)

Pythagoras and his disciples used honey as their main food. Beekeeping was prosperous not only in Attica but almost everywhere in Greece: mainland, islands even in the colonies. The first one to study scientifically the bee was Aristoteles.

The hive with removable frames was used in ancient Greece. In Kythira, the ancient bee-keepers used the “adonaki” which is the precursor of the modern European beehive with the removable frame, an invention of the American Lorenzo Lorraine Langstroth.

DID YOU KNOW THAT…

Honey is preserved in a cool, dark, dry and odorless environment. Crystallization is one if its natural properties and therefore it is not a sign of adulteration or bad quality.